the inordinate appetite of all poor relations

Lord Lionel being an advocate of what he considered a neat, plain dinner, only two courses were served at Sale Park when the family dined alone. The first of these consisted of a tureen of turtle, removed with fish, which was in its turn removed with a haunch of venison. Several side-dishes, such as pork cutlets with Rober sauce, larded fillets of beef, tenderones of veal and truffles, and a braised ham, graced the board, but since his lordship was a moderate trencherman, and the Duke had a notoriously small appetite, the only person who did justice to the spread was Miss Scamblesby, who had (so his lordship had more than once remarked to his nephew) the inordinate appetite of all poor relations.

Not a particularly memorable Heyer, but the food sounds good. Maybe skip the turtle (fascinating article here)? On Rober Sauce:

(A Complete System of Cookery, on a Plan Entirely New, Consisting of Every Thing that is Requisite for Cooks to Know in the Kitchen Business: Containing Bills of Fare for Every Day in the Year, and Directions to Dress Each Dish; Being One Year's Work at the Marquis of Buckingham's from the 1st of January to the 31st of December, 1805 by John Simpson, via googlebooks)

The same book gives a recipe for "tenderones of veal": 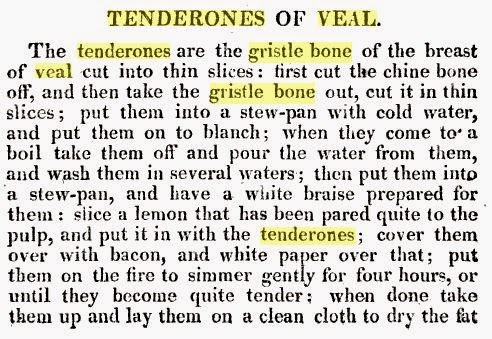 Posted by skiourophile at 06:00

A companion blog to Bibliolathas.